Published 28.11.2019
Leadership Network member Fine Koloamatangi first became curious about Asia through K-Pop music and then went on to develop an interest in traditional Japanese art. As a Pacific person, Fine initially felt some apprehension about joining the Leadership Network, questioning whether she should instead be advocating for Pacific peoples, but she has since realised joining the network "doesn't mean leaving your culture at the door". 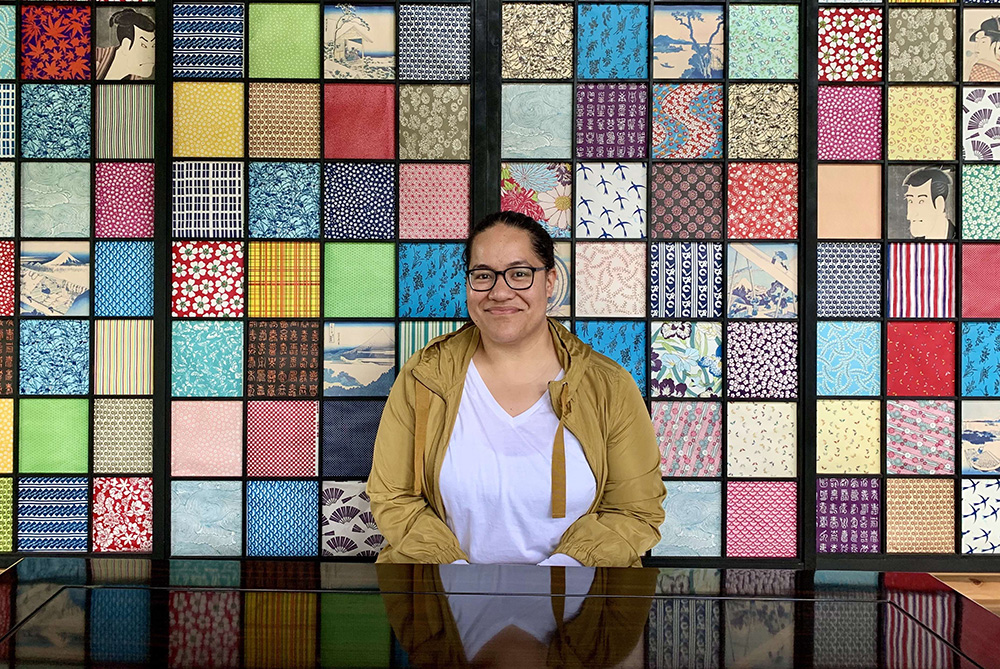 Fine: "“When I first saw the network, I didn’t think it was the place for someone like me."

It was while killing time waiting for a lecture to start at the University of Canterbury that Fine Lavoni Koloamatangi was first introduced to K-pop music (South Korean pop music, for those unfamiliar with the term).

On her own playlist at the time: Beyoncé or something, she reckons.

She leaned in to share an earphone with a mate and her world widened.

Fast-forward eight years or so and Fine now runs the largest online community of K-pop fans in the country.

No time on the ground teaching English, no holiday stop-over, just an appreciation for sweet sounds.

And, also while at university, thanks to an introduction by a passionate lecturer, Fine developed an interest in Japanese art – specifically, ukiyo-e woodblock prints.

Art history was a second major, an appreciated change in pace in-between lectures in law and politics, she says.

Fine’s just handed in her honours dissertation, which zeroes in on a group of ukiyo-e woodblock prints housed at Auckland Art Gallery Toi o Tāmaki.

The prints were collected in the 1940s, post-WW2, but reflect Japanese art during the Edo period of the 17th to 19th centuries.

“I was using those prints to assess what the taste was for Japanese art in New Zealand at the time that they were acquired by the gallery.” Sanka Hakuu by Katsushika Hokusai (1760-1849), meaning Shower below a summit, an example of a traditional Japanese Ukyio-e style illustration of Mount Fuji

Earlier this year, Fine attended an offshore hui hosted by the Foundation in Japan.

The trip was her first to Asia and brought her face-to-face with the subject of her studies.

“On a free morning, I visited a gallery that just displayed ukyio-e.

“That was amazing. It definitely helped to cement my interest in Japanese art.

“To see it in person in the place where it was created - that was really, really special.”

She says she had an image in her mind of what Japan would be like, but being on the ground provided fresh perspective.

“It propelled my image of Japan into the 21st century, because I was very stuck in 19th century Japan.

"Tokyo gave me an appreciation for how modern Japan is now. It’s a technological giant, it’s bustling, it’s a city that’s always on the go.”

Fine calls herself a “newbie” to the Foundation’s Leadership Network. She joined last year, after initially questioning whether she was the right fit for the group.

“When I first saw the network, I didn’t think it was the place for someone like me.

“It seemed that people in the network were really impressive, and I thought: ‘Would someone like me, with an interest in K-pop and Japanese art, be suitable for the network considering the kind of stuff they do?’”

A year-and-a-half in, Fine says she’s found her feet having discovered the network is more diverse than she initially thought and includes plenty of  “creatives”. Fine’s now on a mission to help get word out to other young Pacific people that the network is theirs to embrace.

“I have found it kind of difficult in my own life, being someone who’s Pacific with an added interest in Asia. It’s almost like I’m not advocating for my own people, when I’m so interested in Asia."

However, she’s discovered she doesn’t have to pick and choose – she can do both.

“You can be a Pacific person in the Asia New Zealand Foundation Leadership Network. You don’t have to leave your culture at the door.”

“They’ve been doing it their whole lives, really.

“It’s the Asian century, right? We know that Asia is super important to New Zealand… I think that kind of aptitude for navigation is vital.”

Leadership / News
Big things grow from the seed of an idea