Published 17.05.2018
ANZAC Day in India brought into sharp relief New Zealand and India's shared histories and common bonds for the Foundation's Dr James To, who was in the subcontinent as part of a Track II delegation in late April.

The Asia New Zealand Foundation, in partnership with the New Zealand India Research Institute, led a delegation of experts to India for dialogues with officials, think tanks and social sector commentators. 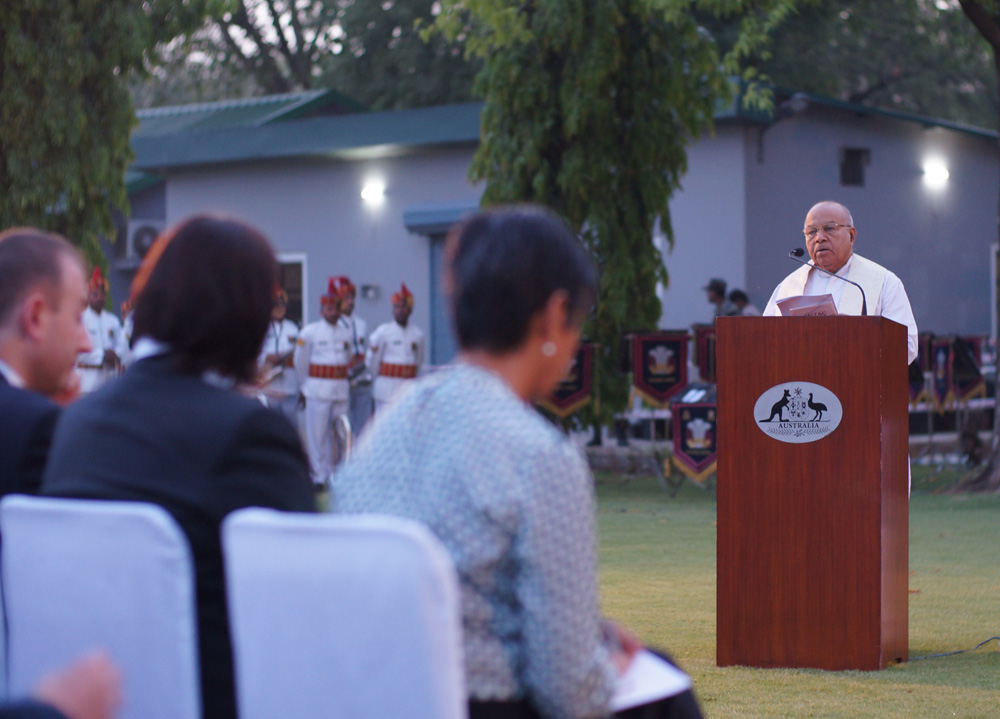 It was 4.30am when we arrived at the Commonwealth War Graves, part of the Delhi War Cemetery in the Delhi Cantonment. Not that it was early for us – we had only been in India for two days, and our body clocks still thought it was 11.00am.

The War Cemetery is the final resting place for 1022 Commonwealth soldiers who died during the Second World War. We were there to honour and remember those brave servicemen at the ANZAC Day Dawn Ceremony hosted by the New Zealand and Australian High Commissions.

During the sombre tributes and reflections on our shared history, we heard how Indian soldiers had supported and fought alongside Kiwi and Aussie troops on the battlefield. Representatives from the Indian Air Force, Navy and Army laid wreaths next to those from New Zealand, Australia and Turkey. The sense of camaraderie could not be more real.

Set far from the hustle and bustle of downtown Delhi, this ceremony was taking place a world away from what we had encountered during the past 48 hours.

I was in India as part of a delegation co-led by the Asia New Zealand Foundation and the New Zealand India Research Institute, engaging in Track II dialogues (informal diplomacy) with officials, leading think tanks and social sector commentators. So swirling around in my mind were a heavy mix of foreign/security/trade policy issues.

When one thinks about the subcontinent, it’s often the distance, size and scale that comes to mind. For every Kiwi, there are 285 Indians. India itself is made up of many states, religions and languages. Its huge geography, long civilization, incredible diversity and deep potential means New Zealand must find a niche amongst a very crowded space. So throughout our conversations our message was about the quality, not quantity of what we had to offer. We emphasized value, not volume in how we should be approaching the relationship.

It was about looking for more points of convergence, and where we could help each other despite our limited scope and resources. In response, the invitation was open to New Zealand to invest, exchange technologies or build knowledge for mutual benefit. Even without a Free Trade Agreement, there was so much we could be doing by working with India. Mohammad must go to the mountain.

And on this point, one of the themes that we heard about was “Make in India” – where the Modi government was pushing ahead with domestic growth by encouraging more local manufacturing and domestic consumption. This plan was quite a move away from the proven export-driven model used by Asian tiger economies during the latter half of the 20th century. But our Indian interlocuters were adamant that their approach was the right way forward.

And local manufacturing was clearly evident from the moment we landed at Indira Gandhi International Airport.

For as far as we could see along the expressway, an endless plethora of small white Suzuki Maruti cars surrounded us – these were joint venture assembled automobiles, and the vehicle of choice for modern India. What about those older style Hindustan Ambassador cars that were ubiquitous only a few years ago? I had trouble spotting one this time around.

But in a 21st century world where technology and automation are disrupting the way industry and manufacturing operates, the government had its work cut out. Delivering enough new jobs as a million new graduates entered the workforce each month? Prime Minister Narendra Modi and his policy makers were scrambling to address this in an election year. The answers were vague, with the burgeoning services market offering one solution. Officials we spoke to seemed rosy in their outlook on this one, despite 90% of the labour market being unregulated.

And to convince voters of progress under its policies, on almost every bus stop, fence line or billboard was the smiling face of Modi reminding everyone on the street how effectively his government was helping India’s society and economy India is well known as a land of contrast, diversity and contradiction. That was certainly my experience in only the short space of three days. As such, I was struggling to figure out where New Zealand was headed with all that is India.

And so it was that one moment during the Dawn Ceremony where I enjoyed a sense of clarity on where our relationship mattered most – our people-to-people links.

Among those fighting for the British Empire during the First World War were two Sikh New Zealanders Jaget Singh and Ratan Chand-Mehra who, despite the discrimination of the time, sneaked into service to fight for king and country. Singh earned medals for his bravery and is survived by descendants in Auckland. Chand-mehra died on the battlefield in Ypres Salient, Belgium.

This is the kind of story that helps enrich our bilateral relationship – but there are many more. Around 170,000 identify as Indian in New Zealand – and last year, a further 61,000 Indian tourists visited us here, and 71,000 Kiwis made the journey there. With each additional interaction and movement, that social tapestry becomes thicker, stronger and increasingly vibrant. Our shared history counts for much, but it’s our shared future that counts for much more.