Published 3.09.2019
With just one of the group having travelled there before, Saint Peter's College First XV's trip to Japan to compete in the Sanix World Rugby Tournament was always going to be an incredible learning curve for all involved. To make the most of this unique opportunity, the team incorporated cultural experiences into their visit, with help from a Foundation school sports grant. 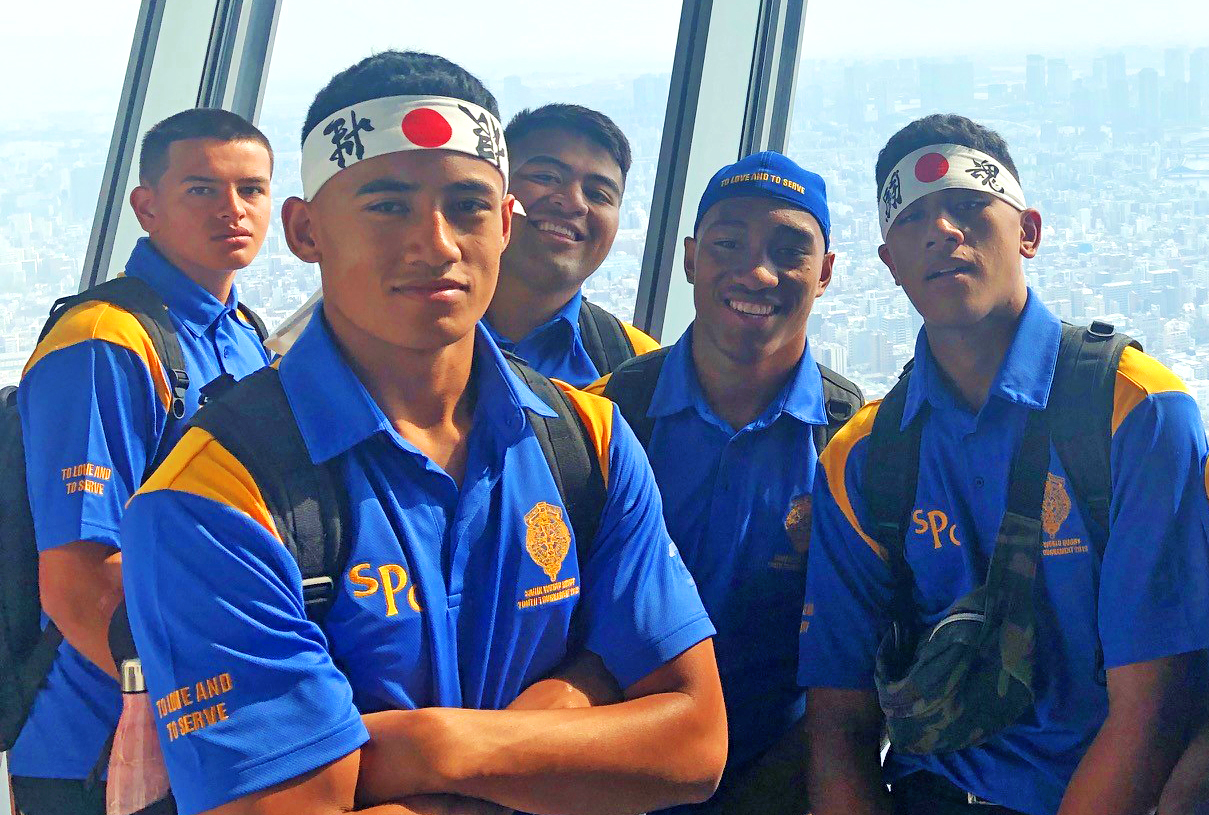 Of the 34 people travelling, only one had been to Japan previously, so it was very much a jump into the unknown for most of us.

Our knowledge of Japan and confidence in navigating its different customs and cultures was pretty low, but we arrived there keen to learn. It’s safe to say our perceptions changed significantly after the two-and-a-half weeks we spent in this amazing country.

With 29 hungry young men in our group, it came as little surprise that it was the food that the students were initially attracted to. This provided many cultural experiences and forced students to leave their comfort zones and experience different tastes.

We visited night markets and Shibuya where we were treated to different Japanese cuisine; octopus balls, sashimi and katsu chicken were some of the favourites.

The city was a bustling hub of commuters and swarms of people. As such a large group, we had to manoeuvre through the underground tunnels and public transport systems carefully to ensure we were getting on the right trains and not losing anyone in the process.

One particular visit into the city was to the Sky Tree, a tower in the middle of Tokyo with breath-taking views. The Sky Tree is the second tallest structure in the world and stands at 634-metres tall. Being able to see the city stretched out before them as far as the eye can see in a 360 degree view gave the students a greater understanding of the sheer size of Tokyo.

The trip to Shibuya was another memorable experience. Each of the touring party were in awe of what they saw as we made our way out from the underground train passage up to the famous Shibuya crossing. So many people, surrounded by so many lights and shops and with the traffic operating as it does the students all agreed, it was controlled chaos.

Another special experience for the group was attending Easter Sunday Mass at a Catholic Church. Being a Catholic boys school, this was a special experience despite the entire two-hour service being in Japanese. The students connected with members of the congregation and at the conclusion of the service they were invited to the front for photos and to exchange gifts. The team visited a church on Easter Sunday

The exchanging of gifts was a common practice that we experienced throughout our time in Japan and was one way that respect and appreciation were expressed.

The hospitality of the people and their respect for visitors was evident throughout our visit, through pedestrians and members of public acknowledging the group, people offering help with translation, traditions prior to entering indoor facilities, and something that was very noticeable and the students often spoke about - the cleanliness of the city, especially considering how densely populated it was.

Part two of the trip narrowed the focus of the students down to preparing for a world championship tournament. This meant traveling to Osaka to stay and train at the impressive facilities of the Docomo Red Hurricanes rugby franchise.

Although focussed on the games ahead, while we were in Osaka we took a special opportunity to travel to Tenryuji Temple. The visit consisted of a four-hour tour through the sacred and iconic temple itself. We also visited the famous bamboo forest; a small local town to witness fisherman at work; and a very steep stroll into the hills to a monkey sanctuary, all while getting a comprehensive explanation from our guide about the history of where we were and what we were looking at. In Osaka, the team visited religious and historic sites of significance

The tournament itself was in Fukuoka and was, of course, a special experience itself. [The team made it to the finals where they were beaten by South African School Paul Roos].

As we had come to expect by this stage of the trip, In Fukuoka we were received with impeccable hospitality. We were grateful to also visit the memorial museum at nearby Nagasaki, a heartfelt insight into the horrible experiences that happened there when the Americans dropped the atomic bomb.

It is safe to say that each and every member of the group left Japan feeling much more confident and left with a greater understanding of the culture and history of this impressive country.

Many of the students commented on how they would like to take their families back to visit one day to share their experiences. The culture, the people, the food, and the places we visited have had a significant impact on us all. It was an experience we will never forget.