Published 18.12.2020
Within the Asia New Zealand Foundation, we often talk about Māori having the edge in Asia – we’ve seen it, we’ve heard about it, so what is “it”? With interview questions in hand, we set out on a mission to talk to Māori operating successfully in Asia and uncover the enigma that is the Māori-in-Asia x-factor. Who are they, what are they doing and why are they succeeding? 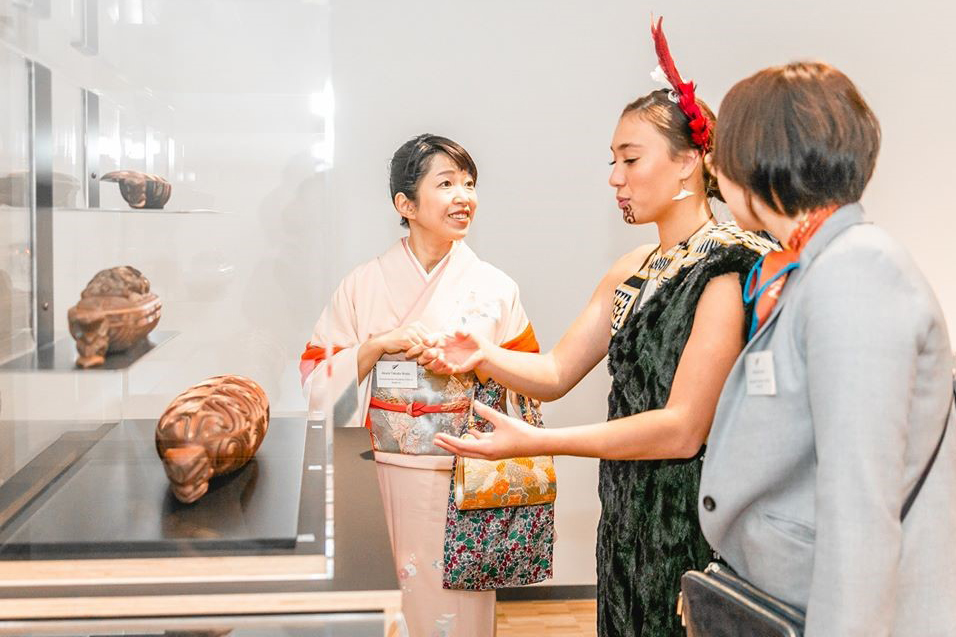 A member of the Tuku Iho exhibition explains aspects of the taonga to the indigenous Ainu of Japan. (Photo credit: Te Puia - Cinzia Jonathan)

Our series Unlocking the key to Māori success in Asia begins with Karl Johnstone (Rongowhakaata, Te Aitanga-a-Mahaki, Ngai Tamanuhiri), who is owner and director of Haumi NZ, a business that initiates designs and delivers cultural exhibitions and shared cultural experiences from New Zealand throughout the world. It’s immediately apparent from speaking with Karl that Māori whakapapa and cultural links to Asia have stood the test of time.

“Some Asian values mirror our own as Māori. For example, the Japanese have a concept called ‘omotenashi’ which completely mirrors what we would call ‘manaakitanga’ and the Chinese operate fluidly with concepts like kai tahi (eating together) and mahi tahi (working together)”

These sentiments were echoed in our conversations with Tapeta Wehi (Te Aitanga-a-Mahaki, Ngai Tuhoe, Te Whakatohea, Te Whanau-a-Apanui) founder of Te Wehi Haka who connects to Asia through the sharing of cultural experiences and kapa haka.

In Tapeta’s view, “It is because of our strong moral foundation that we have a natural affinity to the Chinese who build businesses and friendships through developing a strong relationship first as well.”

“While in Japan, I noticed that shrines are very similar to marae, so when we performed, it felt very special to everyone.”

As Tamati said, whereas other international players would “...always question why things are done in different ways. For Maori, we have an understanding that there’s more than one way.”

For social enterprise entrepreneur Kaye-Maree Dunn (Te Rarawa, Ngā Puhi, Ngāti Mahanga, Kahunungu, Ngai Tamanuhiri), the ethicality of dealings that is expected and reciprocated in indigenous-to-indigenous engagements was central to her success in Vietnam.

“Firstly, as a Māori, the way that I was communicating was from a place of humility.

“Secondly, I’m looking at how any ventures can be mutually beneficial for both of us. I’m thinking about how we might bring them to New Zealand to take advantage of the exchange rate and develop trade opportunities. How can we partner in a way which is mana enhancing for both sides.

“I'm trying to negotiate as I would expect from a good Treaty partner. That's how I wanted to conduct myself in their country.”

Perhaps the statement that best sums up the key to understanding the x-factor that is Māori success in Asia, and gives insight into all our interviewees' perspectives is a quote by tech expert, Nikora Ngaropo (Te Rarawa, Tūhoe, Ngāti Porou, Ngāti Kahungunu),

“The future for us in this space has to be built around culture. By culture I’m talking about values. Within that, it’s pivotal for us to be creating relationships that are enduring and based around cultural nuance. A lot of people don’t understand the intricacies of culture in terms of being very sensitive to culture and that’s where I think we excel.”

This series was researched and written by Mihi Satele and the Foundation's Māori adviser (and Mihi's mother) Tania Te Whenua.