Published 18.01.2016
Tragedy struck Jakarta a little over 12 hours before we were due to begin making our way there for the second 15+15 Dialogue between Indonesia and New Zealand.

Militants stormed a police post in Indonesia’s capital in the first major terror attack the city has experienced since 2009. Fortunately, despite initial fears the attacks might unleash a wave of unrest, things calmed down quickly.

We were thankful to still be allowed to travel and, as we would discover over the next few days, the resilience displayed by Indonesians on this occasion was just one of the things that made our visit so wonderful. The 15+15 Dialogue, organised by Indonesia’s Habibie Center and the Asia New Zealand Foundation, brought together 15 young leaders from each country for three days of track II talks focused on strengthening ties between New Zealand and our nearest Asian neighbour.

As we got to know our Indonesian peers, we were inspired by their social activism, entrepreneurship, and passion for their country. We enjoyed frank discussions with them on issues of human rights and politics, and realised they had as much to teach us about our own country as they did about theirs.

There was plenty of time to kick off the conversations on the bus from Jakarta to Bandung, the capital of West Java province. Although the distance is just a little further than from Auckland to Hamilton, it took at least twice as long. Machet - traffic jams - we quickly learned are a constant challenge in Jakarta, and the roads to Bandung are frequently clogged with those flocking there to shop and eat.

The first day of the dialogue focused on building whanaungatanga - a sense of kinship and connection. The Habibie Centre’s head of international relations, Wirya Adiwena, gave us a crash course on Indonesia’s political history, which was followed by a presentation from the New Zealand Embassy’s Jemma Lala putting New Zealand’s relationship with Indonesia into context.

As delegates from both countries shared insights into their sectors, we began to get a more detailed understanding of the depth of connection. A passion for person-to-person engagement was common to all those working in community development, environmental conservation and media, and many ideas were shared about how to achieve that.

That evening, a few of the delegates were brave enough to engage in some “punk rock diplomacy”, attending a particularly lively gig on our first evening in Bandung. Chris Henderson dove head-first (literally) into one of the most intensely physical, yet courteous, mosh pits he had ever seen, while the rest of our group watched timidly from the side lines.

Day two of the dialogue provided further opportunities for all delegates to learn more from one another and to draw inspiration from Bandung.

Dr Dwinita Larasati of the Creative Economy Committee for Bandung started the day off discussing how people, places and ideas can all be drawn together to create connections, collaboration and commerce. Dr Larasati focussed on how design and innovation can build entrepreneurial and business potential.

The remainder of day two was spent in sector mash-up groups devising new ways to develop tangible outcomes from our dialogue. Law and human rights teamed up with community development, health and education; foreign affairs partnered with media; and business sector joined forces with environmental conservation.

Each of the three groups were given until the latter part of the afternoon to devise a pitch of how to carry on the dialogue and promote tangible outcomes from our time in Bandung. Many of the sector mash-up presentations culminated in proposing some form of platform to enable the sharing of ideas and resources.

The trip also gave New Zealand delegate Ryley Webster of Sustainable Coastlines the opportunity to share his passion for fun, education-driven conservation. Webster, who is currently based in Papua New Guinea, gave two captivating presentations, sharing a personal account of his love for the ocean and how he was able to transform this passion into promoting positive action. After speaking to the Community for Maritime Studies Indonesia, there was a healthy appetite for adopting some of Sustainable Coastlines’ community-based actions.

Back in Jakarta, the New Zealand delegation and distinguished guests had the privilege of being hosted for dinner by Stephanie Lee, the first New Zealand ambassador appointed to the ASEAN region. The evening provided an exciting opportunity to network among the guests who all see a strong relationship between Indonesia and the ASEAN region with New Zealand as fundamental to the development of both countries. 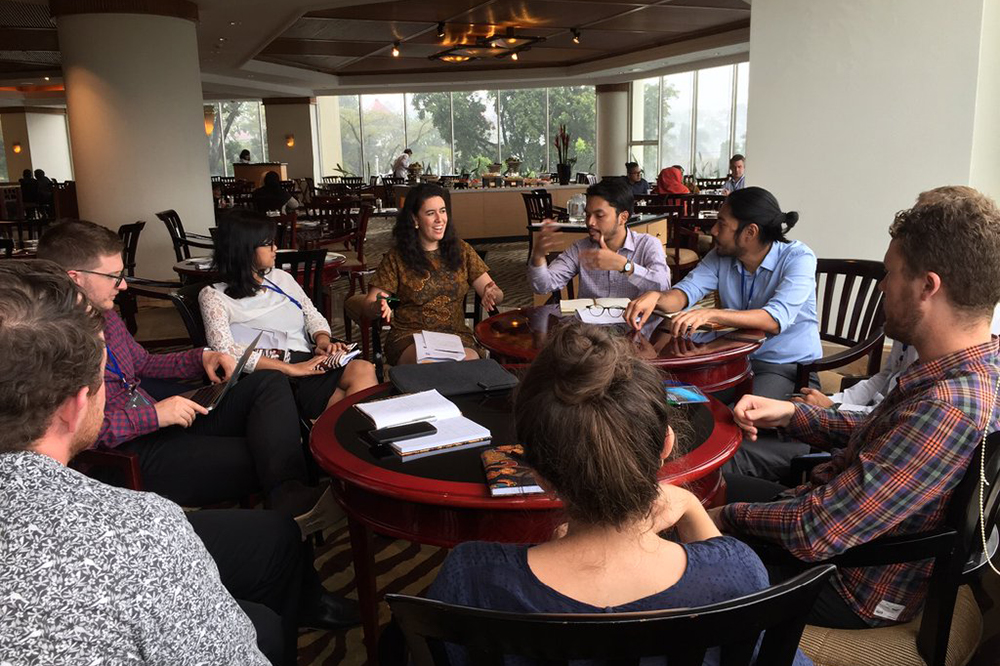 The next day we were hosted by New Zealand’s Ambassador to Indonesia, Dr Trevor Matheson. We shared with him our experiences of Indonesia and where we see room for growth in the developing relationship between our two countries.

We were also lucky to visit Google’s headquarters in Jakarta. The company’s work is largely based around innovation and problem solving to improve internet access in an exponentially growing market.

Many parallels can be drawn between the work of Google and the work that both Indonesia and New Zealand need to do to keep building on in order to strengthen ties between the two nations. This 15+15 Dialogue was just the beginning on a long journey to building productive and sustainable relations across sectors between the two countries.

This article was written by Leadership Network members Kim Choe and Byron Sanders who partook in 15+15 dialogue.

It’s fair to say Wellingtonians love their coffee, so it’s probably no surprise that an Indonesian language and culture group with a name that literally translates to "Coffee Shop" is going to be a hi