Published 29.03.2018
Having travelled to Asia before and with friends living in Seoul, Pang Suwanaposee says she quickly found her feet in South Korea's capital city. Despite feeling at home, Pang says the three months she spent in South Korea changed her perspective on life.

I’d never been to South Korea before, but I had always wanted to visit, so when I arrived I was so hyped!

I already had an idea of what South Korea would be like from scouring the internet and talking to my Korean friends. Also, as I am of Asian descent and have visited other Asian countries, I found it easy to adapt to life in Seoul and settled in smoothly.

If you visit Seoul during winter, be prepared for -10°C! I immediately purchased a long padded jacket - which happened to be the trend and everyone else was wearing one too! My friend said I looked like a walking kimbap (Korean sushi) but it kept me pleasantly warm.

Wilson Parking welcomed me with open arms. All my co-workers were very friendly. I worked with the IT team, which was an awesome, close-knit team of five people. The atmosphere was much like family. I had no deadlines to meet and could work at my own pace.

As expected, I did a lot of programming and learnt about Wilson’s parking system and processes. It was interesting to explore the inner workings of their database.

I worked on designing a new parking database system. It was a big project for me and it was nice to design something from scratch. The project required me to learn about the existing car park system and how customers and payments are managed. I used an EER (enhanced-entry relationship) diagram as a starting point to help me get an overview of the database and the relationship between entities. After planning and getting the documents reviewed, I created a program to model the functionality of the system. Sometimes after work I’d visit Hongdae, animal cafes, ice-skating or coin karaoke. I enjoy Korean cuisine and love bibimbap (A Korean rice dish) and hotteok (Korean pancakes). There are many restaurants near the Wilson Parking office and I would try something new every day for lunch! The street food is also exciting and delicious.

During the three months I was in South Korea I travelled as often as I could during weekends. I visited the DMZ (Demilitarized Zone) and stepped over the border into North Korea; sat next to camp fires, went sledging and watched snowy rabbits on Nami Island; went ice fishing at Hwacheon Ice Festival, and visited the Winter Olympics in Pyeongchang.

Visiting the Winter Olympics was a once-in-a-lifetime opportunity, so I had to go! I got tickets to a figure skating training event. You can probably imagine how impressive it was to watch world-class figure skaters perform live.

The Olympic Park was also intriguing. What interested me the most there was Samsung's showcase. They had their latest virtual technology available for visitors to experience events like snowboarding, skeleton, and floating on the moon. I have never seen so much advanced VR technology in one building - it was like a VR theme park!

I was fortunate enough to meet the New Zealand Minister of Finance, Hon Grant Robertson, at an event in Seoul. He shared his insights into the new Government's economic and trade agenda and bilateral relationship with Korea. 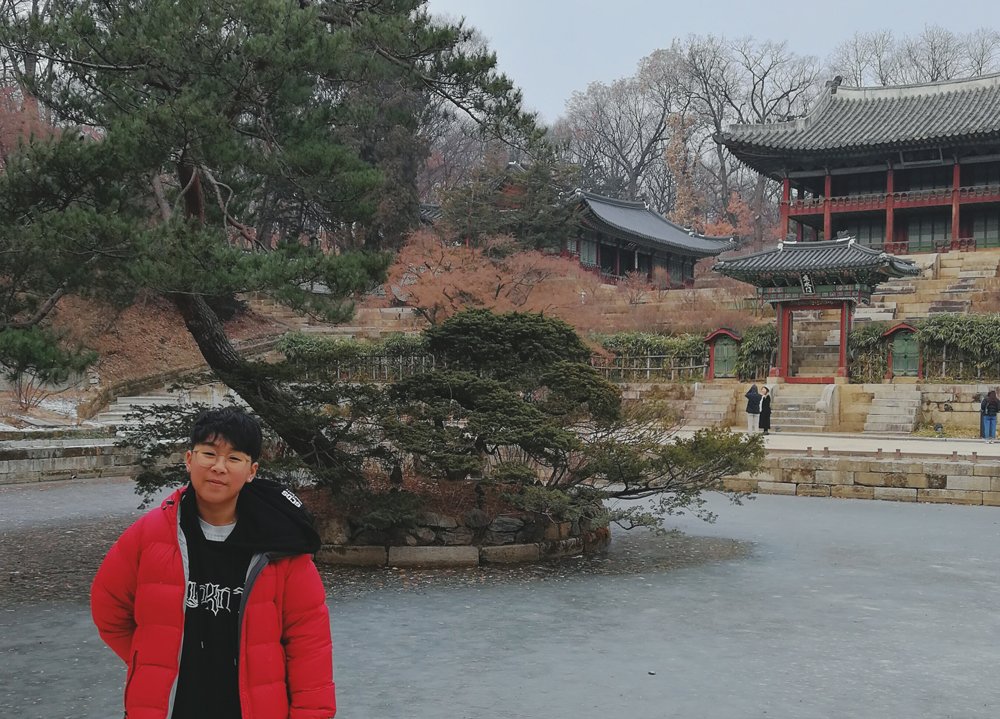 Pang: "I developed more as a person, made new friends and can now look at life from a different perspective."

South Korea is a developed country with a thriving business culture and there is a lot we can learn from them. I think having a good understanding of business culture in Asia is applicable to New Zealanders because there are many Asians living in New Zealand and, being part of the Asia-Pacific, it is hard to find a New Zealander without any connection to Asia.

I learnt many, many things during my time overseas but the main life lesson I took away is to to step out of your comfort zone and try new things. By doing so, I surprised myself on what I could achieve in only three months. I tried learning a new language, volunteered and planned my own adventures. I developed more as a person, made new friends and can now look at life from a different perspective.

The parks on the edge of the Han river are a welcome respite to the hustle and bustle of Seoul, writes Sam Thomas, who is doing a three-month residency at SeMA Nanji.