Published 19.03.2018
Moving-image artist Sonya Lacey travelled to Cambodia late last year to shoot her film 'How to get from One to Two' , which looks at the country's thriving book piracy industry. She undertook the project while an artist in residence at NTU Centre for Contemporary Art in Singapore. The Foundation assisted Sonya in making the film with an arts grant.

Much of my artwork considers cultures around print and publishing, and when I was invited to undertake a project in Southeast Asia, anecdotes about book piracy in Cambodia came to mind.

Before this visit I'd never been to Cambodia and – anticipating culture shock – I wanted to keep an open mind about how to develop a work in that context.

Traveling to such an unfamiliar place required a methodological shift in my work. Usually I have a strong sense of a project before I start filming. In this case, I knew I wanted to gather footage related to book piracy but didn’t want to predetermine what the outcome would be.

Because of all the unknowns – not to mention the cost of shooting on 16mm film – I needed to do a lot of research in Singapore before travelling to Phnom Penh for the shoot.

I spoke to people who had connections to the city, read academic articles and journalism about copyright in the region as well as fiction based in the country. Connecting with Sa Sa Art Projects (Phnom Penh's main contemporary art gallery) was also invaluable.

When I arrived I shot footage at the copy shops, which are full of people making reproductions to sell to wholesalers, at a large commercial print factory that was in the middle of printing 8000 copies of a mammoth government text, and a small roadside 'book vendor'. I relied heavily on my assistant to talk us into places. 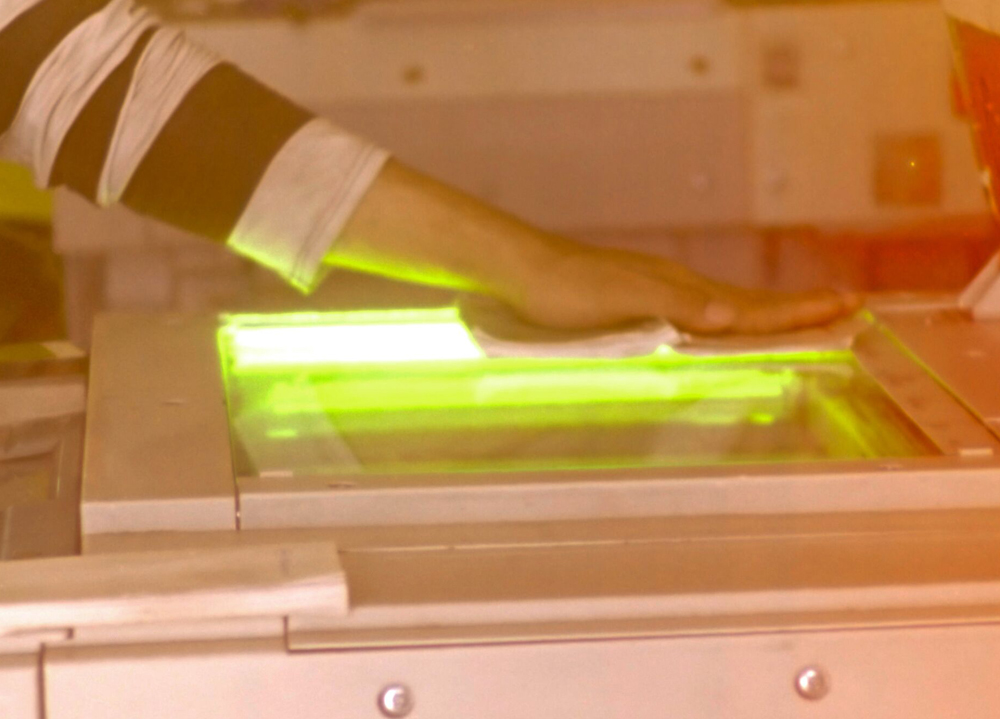 Sonya: "Nerves were frayed in Phnom Penh's print/publishing industry because a couple of days before I arrived the country's only independent newspaper was strong-armed out of circulation."

Nerves were frayed in Phnom Penh's print/publishing/journalism industries because a couple of days before I arrived the country's only independent newspaper, The Cambodia Daily, was strong-armed out of circulation and a Radio Free Asia journalist was sent to jail, accused of setting up a covert news broadcast desk from a karaoke studio. So people were understandably nervous about granting us permission to film inside their book printing businesses, worried the footage could be used against them.

Book piracy in Cambodia seems to have developed as a legacy of the anti-intellectual Khmer Rouge regime.

I was interested in researching three waves of bootlegging: hand-copied books lent by roadside stalls in the immediate wake of the Khmer Rouge regime; then, after photocopiers became accessible, cheap copies were made en mass (most of the books for sale in the country seem to still be produced in this way); and finally, I was also interested to note that Gottfrid Svartholm, founder of the bit-torrent website Pirate Bay, was exiled in Cambodia to avoid answering charges related to the sharing of digital files.

The most acute example of how my work was 'influenced' by the political system came after the shoot, en route back to Singapore. Border security opened the canisters of film! The footage was exposed to light and parts were destroyed, but luckily only the ends of the rolls were badly affected.

I've only recently had the film developed and digitised, so I'm at the stage now of working out what final form the work will take.

There's a lot I'm still mulling over from my time in Singapore and Cambodia. As well as the time spent making work, many other experiences continue to work away at me: art works seen, regional specificities and forms of practice that seem pertinent in that part of the world, the experience of working alongside new people . . .

Find  out more about Sonya and her work