Published 15.08.2019
The Foundation's James To looks back on three very different Track II diplomacy experiences he recently participated in - in the US, Malaysia and New Zealand - where he got a taste of the various ways Track II can be approached.

I’ve recently returned from a Track II degustation of inter-continental proportions, enjoying a month-long odyssey of people-to-people diplomacy served up in a fusion of cultures, formats and scale - what a way to savour the richness that Track II can bring to understanding the drivers and contexts behind international relations and foreign policy. 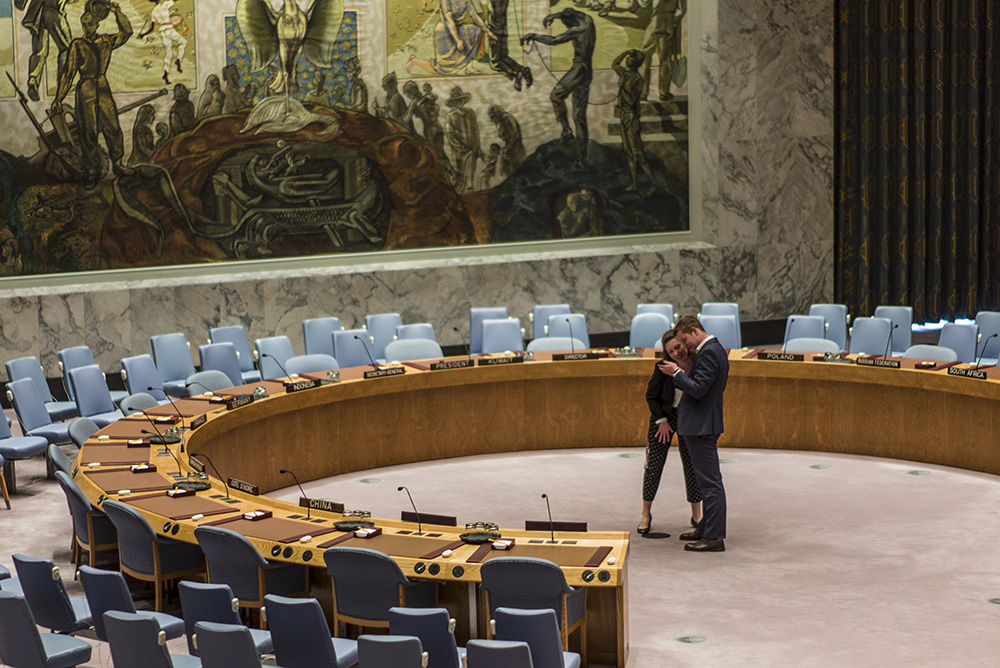 In New York as part of a State Department visit, the delegation visited UN headquarters

For starters, I began with a State Department International Visitor Leadership Programme across the USA, and like most things in America, it was on a grand scale – visiting Washington DC, New York, Nebraska, and Seattle over a two-week period. My US visit was followed by spicy hot-pot commentary around Southeast Asian strategic and geopolitical developments in Malaysia. For dessert, to keep with the dining analogy, I partook in a cosy fireside chat with ASEAN diplomats in the hallowed wood-lined library of St Margaret’s College in wintry Dunedin.

For anyone interested in gaining insights into foreign policy, Track II is all about drawing out colour and nuance to help flesh out the official messaging we normally receive in formal speeches or state media releases. Hearing the views of diplomats, journalists, academics, commentators, government officials, and NGO/community leaders helps us paint a more informed picture of the world.

And over the course of a month, I had the opportunity to sample different approaches to Track II in the form of a tour, conference, and a dialogue - each with its own flavour and atmosphere.

My Track II Odyssey began with a deep dive into American foreign policy and decision making by getting right into the belly of the beast – literally inside the world’s biggest office building, the Pentagon.

Our delegation (an international group of 18 policy advisors, civil servants, media and university lecturers) was taken through the various divisions of the armed forces, saw displays showcasing America’s military relationships and alliances – including ANZUS – as well as marking a sombre moment at the 9/11 memorial and chapel. We were briefed by the Under-Secretary of Defence, and learned about the National Defence Strategy and what theatres Washington was preparing for in an age of shifting and uncertain geo-political developments. Over the next two weeks, we met with state and federal level officials, diplomats, think tankers, lobbyists and academics – exchanging perspectives on the Indo-Pacific and regional competition.

We talked about non-traditional security threats such as climate change and illegal/irregular migration. We heard from civil society, business people, grassroot community organisations and chatted with everyday Americans at lunches and dinners. We met with a Rotary Club, volunteered at a foodbank, and shared a meal with a host family.

Some speakers were surprisingly direct and explicit, while others guarded and measured – even though the meetings were off the record. We heard from a dutiful career diplomat whose role was to “serve the pleasure of the President” and from labour union reps and fair trade activists openly critical of the Trump administration and lamenting the effect of the tariff war on farmers.

We met with both Democratic and Republican policy advisers working to push through their agendas in a deliberately dysfunctional legislative system of checks and balances; we heard from desk officers and agents about their experiences in the field.

The objective of the programme was to impress upon us the nature and scope of the US political and economic system, as well as its culture and history – the kind of soft power America is famous for. DC was museum heaven. In New York we saw Broadway shows, wandered around the Guggenheim, and took in expansive views of Manhattan from the Staten Island ferry.

Big-city life contrasted with a trip to the Midwest – the heartland of beef, corn and soya beans. Lincoln, Nebraska, was a refreshing change to the concrete jungle where we could take a deep breath of clean air and kick back with the locals at a jazz festival.

With such an immersive experience to better appreciate the wide spectrum of perspectives, this type of people-to-people diplomacy was in a league of its own – in terms of substance as well as interpersonal relations, emotive connection, and overall impact. And while my US trip was a super-sized entrée into Track II – all appetisers leave you wanting more… I was barely back home before jetting off to my second course in Kuala Lumpur for the 33rd Asia Pacific Roundtable (APR). The APR was a three-day gathering of 300 participants to talk about political contestation in the ASEAN region, nuclear arms control, challenges and responses around Rohingya refugees, cyber security, and North Korea. What a range of topics to get into, especially with world class speakers to kickstart the conversations – including Malaysian Prime Minister Mahathir who is still going strong at 93!

Things got a bit heated at times,  with the assertive narrative that I heard in Washington only days prior repeated again, and discussants from both the floor and stage firing back. These testy exchanges added a touch of drama and entertainment to the proceedings, while providing some memorable quotes to inform my thinking towards a particular country’s position or policy.

But hearing these comments while sitting among a vast audience in a hotel conference room will always be less personable than a two-week tour or intimate conversation. So it’s the coffee breaks and chats on the margins that are often of most value in these large-scale symposium settings. And while its good to hunt down academics or officials for their views, there is also an imperative to hear from as many perspectives as possible.

My role at APR was to bring more fresh voices to the Track II table - what we call our NextGen work to identify and foster a diverse range of aspiring policy makers, researchers, and commentators to think more about foreign, security, trade and economic policy as a career pathway or academic interest.

We look to build enthusiasm and confidence among this cohort for engaging in events like this by providing useful side line activities – a workshop with tips on how to get the most out of the experience, and regular feedback loops to help improve future dialogues. We prefaced the main conference with our own in-house dialogue to give our NextGen a taste of what to expect.

And growing the NextGen genepool continued back home in New Zealand, where I convened another dialogue with students and 11 ASEAN young diplomats – in a format we call Track 1.5 - a hybrid of official and unofficial exchange. Sitting in an olde worlde library that could have come straight out of a Harry Potter movie, we discussed the state of the international rules-based order, how small powers were navigating great power dynamics, and the role of regional and national identity in our international engagement.

As a smaller group, we were able to speak quite freely and frankly with each other. The relaxed mood put everyone at ease to share from a personal perspective. And where there were sensitivities, these were declared from the outset, with an emphasis put on “saving face” – this was a first-hand appreciation of the ASEAN Way.

These cosy conversations were the perfect way to round off my month-long Track II sojourn. Having tasted informal diplomacy in three different ways, no matter how you experience it, Track II is very much about the people you meet and the reading of the room. Good ingredients count, but so does style, timing and finesse when it comes to making sure what you’re hearing is cooked all the way through. If you’re ever asked how you like you’d like to sample Track II international relations, the answer has to be “well done.”

This report looks at the leading Asia-focused track II institutions in New Zealand, Australia and the Asian region.