Published 16.06.2021
Despite the impacts of Covid-19, New Zealanders increasingly believe it is important for their country to build ties with Asia, new research from the Asia New Zealand Foundation shows.

The latest report in the annual New Zealanders’ Perceptions of Asia and Asian Peoples survey finds that in 2020, 73 percent of New Zealanders believed that developing political, social, and economic ties with Asia was important for New Zealand’s future, up from 67 percent in 2019.

How important do New Zealanders think it is to develop political, economic and social ties with Asia?

The Asia New Zealand Foundation Te Whītau Tūhono has been tracking New Zealanders’ perceptions of Asia since 1997. The Foundation commissioned Colmar Brunton to lead the research for this report, which saw just over 2000 New Zealanders surveyed in October and November.

“As we know, Covid-19 has presented major challenges to New Zealand’s international engagement over the past 18 months. It’s created a level of disruption most of us had not experienced previously,” says Asia New Zealand Foundation executive director Simon Draper.

“But this research tells us that New Zealanders think Asia really counts, and it shows they have an appetite for learning more.”

In 2020, for the first time, more New Zealanders saw China as posing a threat (35 percent) than those who considered it to be friendly towards New Zealand (31 percent).

“But it’s interesting to see that New Zealanders also named China, alongside countries such as Australia, the US, India and Japan, as a key relationship that New Zealand should put extra effort into building.  They recognised the need to keep engaging,” Mr Draper says. 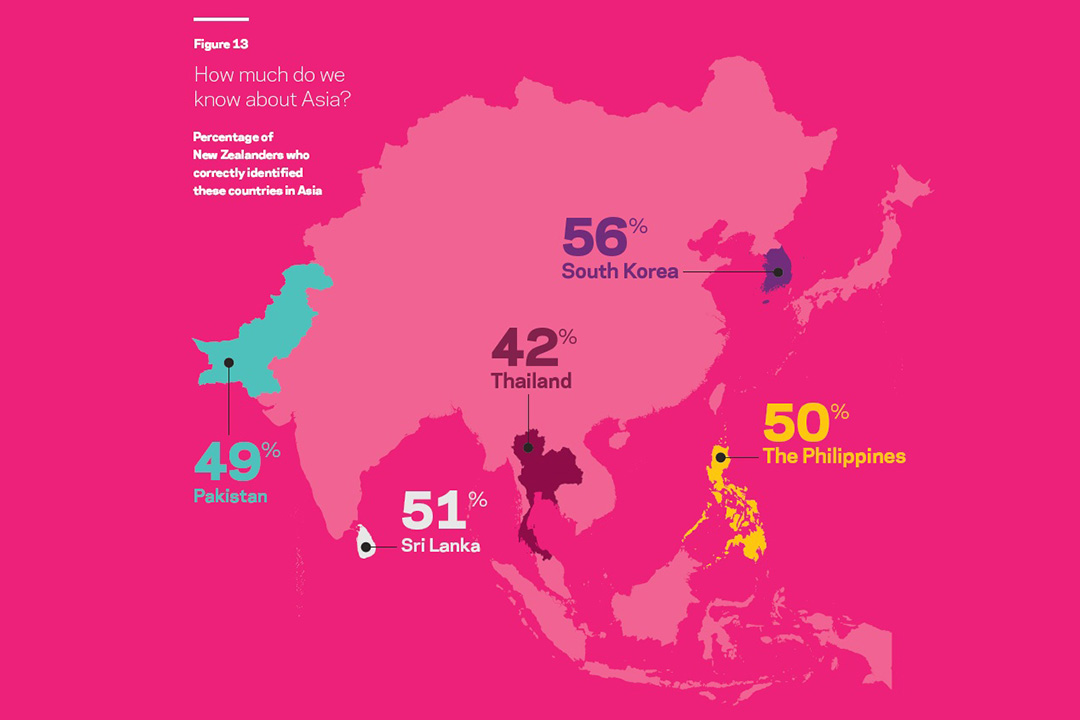 The report also finds New Zealanders connect with Asia through a range of interests, including food and travel, but also increasingly through areas such as music, art, literature, languages, politics, history and current affairs.

“We know that personal experiences and people-to-people connections are really valuable ways for New Zealanders to learn more about Asia,” Mr Draper says. “Digital connections and New Zealand’s Asian diaspora communities have helped fill some of the gaps while we haven’t been able to travel. For instance, we’ve seen some rich contributions from Asian New Zealanders to the arts sector in the past year.

However, the report also highlights some concerns New Zealanders have; for instance, about the potential for environmental, political and security issues in Asia to negatively impact New Zealand in the future.

Included in this year’s report are the results of interviews with New Zealanders from a range of diverse backgrounds, highlighting how they engage with and learn about Asia in their daily lives.

Māori participants in these interviews highlighted the importance of cultural commonalities between Te Ao Māori and Asia and of their aspirations in relation to Asia. Many of the themes echo the findings of the Foundation’s 2019 research, Perceptions of Asia and Asian Peoples from a Te Ao Māori Perspective.


Perceptions of the region

A new report from the Foundation — Viet Nam and New Zealand: Let’s go! — tells the story of the country’s dynamic relationship with New Zealand.

Atera Apirana's love of kapa haka has taken her to Japan and China to perform and been the catalyst for learning about the cultures of those countries.