Published 7.10.2016
Journalist Jimmy Ellingham describes his time as a delegate on the Foundation's Timor Talks dialogue. The dialogue saw a group of young leaders from New Zealand travel to Timor-Leste to meet with counterparts there. The two groups discussed issues including the economy, entrepreneurship, education and the role of the media. They also visited historical sites and met with former Timor-Leste Prime Minister and Nobel Peace Prize recipient José Ramos-Horta. 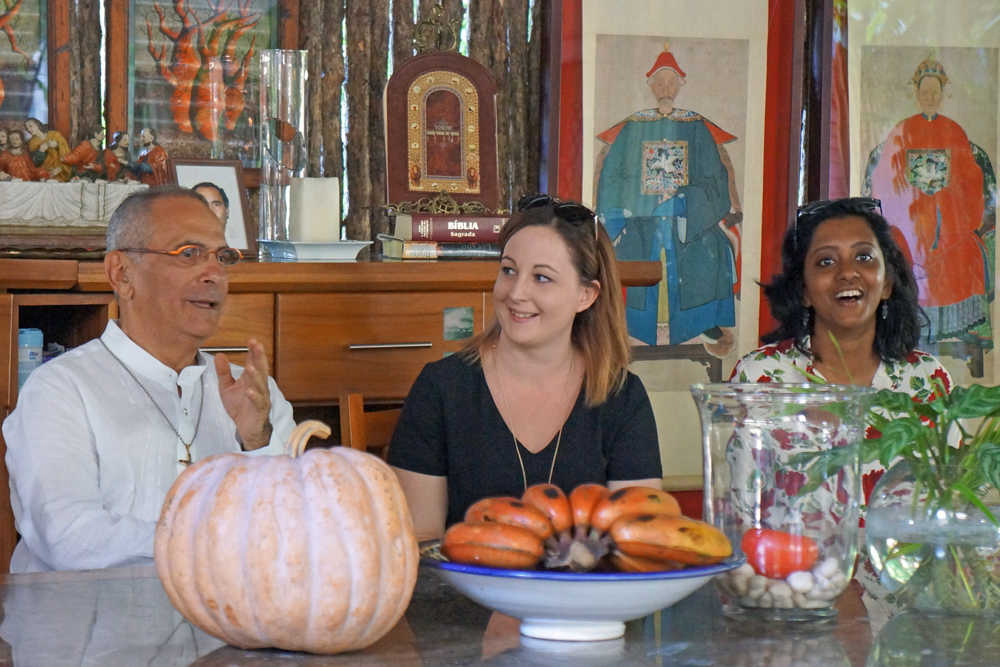 Down a long gravel drive the mini-van rolled up to the gate, where the burly security man dressed in blue eyed us up.

We were let through and stepped off into the late afternoon heat, cooled by relieving canopy of trees on this large property to the east of Timor-Leste's capital, Dili.

Here we were met by the clean-cut, tanned and instantly recognisable form of Jose Ramos-Horta, now in his mid-60s.

Ramos-Horta lived in exile for two decades during his country's battle for independence from Indonesia.

He tried, mostly in vain, to publicise Timor-Leste's plight and get the United Nations and governments the world over to listen.

In New Zealand, he was the face of the independence movement and is the figure we think about when we recall the terrible situation in the country from the Indonesian invasion in 1975 until independence in 2002, and the internal conflict in the years following.

There's also the none-to-small matter of his Nobel Peace Prize in 1996. As we say in New Zealand, this man has mana.

For about an hour we hung on to his every word as he spoke about Timor-Leste, politics, world affairs and meeting Nelson Mandela. That was in the mid-1990s, but the pair didn't discuss the infamous 1995 world cup rugby final, a somewhat baffled Ramos-Horta informed the New Zealanders when asked.

The next day though, what Timor-Leste went through and what Ramos-Horta was trying to tell the world about hit home.

One of the delegates was Jose Sousa-Santos. A former Australian soldier, he worked as an adviser to Ramos-Horta and now lives in New Zealand.

His roots are in Timor-Leste and he suggested a quick walk around the corner to his former family home.

We arrived at a grand Portuguese-style villa Sousa-Santos' grandfather built 80-odd years ago. It's now a centre of music, culture and arts. There's a theatre, which a few nights later pulsed to a Brazilian samba concert. There's rooms for study, writing, meetings, dialogue, and a grand backyard.

There's also a well. And it's here that Timor-Leste's tragic past was brought to life for us by Sousa-Santos, our colleague, our friend.

As we began to move through the house's ornate entrance, he told us a story. It's one we'll never forget.

In 1999, the year Timor-Leste voted for independence, the country was gripped by a reign of terror from pro-Indonesia militia. Today Dili is quiet, peaceful, calm. Then it was heaving, straining, burning and under attack.

At the house, Jose's then 17-year-old cousin Manelito Carrascalao was sheltering dozens of terrified women and children as pro-Indonesian militia ransacked the city.

The young man bravely answered the gate to one group of militia, who moved on without trouble. The next group though had no second thoughts. They killed Jose's cousin and moved into the property indiscriminately wiping out every person they could find. Some miraculously survived by cowering in corners. Those who didn't were tossed into the well, 60 or so bodies heaped in.

And there we all were, standing around it. Then we sang the beautiful, short, waiata E Torua Nga Mea, about hope, faith and charity. Croaking the words out wasn't easy when you're crying or on the verge of tears. But Sousa-Santos said it was beautiful and it was a moment that will stay with all of us.

Most of the Kiwis came from the Asia New Zealand Foundation Leadership Network, and delegates from both countries brought a wealth of experience from diverse fields, such as politics, human rights, arts, business and journalism.

Inbetween visiting sites and learning about Timor's past, dialogue sessions took place out of the Timorese heat at our grand old base, Hotel Timor.

Here ideas were thrown about, arguments digested, horizons expanded. A wide range of issues were tackled, generally with one New Zealand and one Timorese delegate leading discussion and then opening it up to the floor.

New Zealand and Timor-Leste have a close friendship extending the best part of two decades. Dialogue delegates will play a role in the future of that, but we will never forget the past. We all felt it.

Jimmy Ellingham is the news director at the Manawatu Standard in Palmerston North. Ellingham reported from Dili in 2012 on the withdrawal of the United Nations Integrated Mission in Timor-Leste.

Leadership / News
An inspiring experience at
the World Economic Forum

Leadership Network member Shruthi Vijayakumar describes attending the World Economic Forum (WEF) on ASEAN in Phnom Penh, Cambodia. She was one of 25 people under the age of 30 representing the WEF Glo

Four journalists gained a small taste of the complexities and contrasts of a country of 1.3 billion people on the Asia New Zealand Foundation's first media trip to India.