Published 30.08.2017
Leadership Network member Will Seal travelled to Jakarta, Indonesia, earlier this year to research Indonesia's unique relationship with ASEAN (Association of Southeast Asian Nations). In this article, he describes his trip and touches upon some of the factors that set Indonesia apart from other ASEAN nations. Will Seal: "Though the region and ASEAN face many hurdles, both foreign and domestic, the opportunities for the region are significant – matched by similar prospects for international partners like New Zealand."

The World Bank describes Indonesia as the largest economy in Southeast Asia and 16th largest in the world, having become the region’s only G-20 member in 2008.

Indonesia’s GDP climbed a staggering 422 percent between 2000 and 2015, from USD$165b to USD$862b in 2015, and is forecasted to exceed USD$1 trillion by 2020. This prediction would make Indonesia one of the world’s ten largest economies within a decade.

As of 2016, its 259 million inhabitants make Indonesia the world's fourth most populous nation, which includes a rapidly expanding (and purchasing) middle class. For New Zealand, Indonesia’s value as a partner is unquestionable.

Beyond these facts and figures lies an incredibly unique country and culture — one with a distinctive position in the region. Its 17,000 islands contain more than 300 ethnic groups speaking in excess of 700 languages.

For a good portion of last year, I spent my days trekking back and forth across the urban sprawl of the Special Capital Region of Jakarta courtesy of a dissertation for a Masters of Global Diplomacy from the University of London’s School of Oriental and African Studies (SOAS).

More specifically, I was there to research the unique relationship between Indonesia and ASEAN — the 10-member-strong Association of Southeast Asian Nations (ASEAN).

Highly regarded for its efforts in regional peace building, economic growth and diplomatic engagement, ASEAN has long been considered the ‘cornerstone’ of Indonesian foreign policy, with Indonesia unofficially considered the ‘natural born leader’ of the group.

This unique title is attained by its somewhat uneven position in the region. For instance:

Indonesia’s ‘first among equals’ status would seem evident — so too should the fascinating regional political dynamics that drew me to explore this topic.

A nation famed for the warmth and friendliness of its people, I was thrilled to discover this attitude extended to the more than 40 ASEAN and Indonesian diplomats, politicians and officials, journalists, academics and analysts that patiently assisted me and contributed their views and insights to my work.

Saying I was grateful would be a drastic understatement, particularly for the openness and frankness with which they were willing to discuss domestic and foreign policy, and share insights and anecdotes from their experiences and work.

As a robust democracy (the world’s third largest in fact), a diversity of opinion was abound. This provided the perfect intellectual and academic backdrop to working in a city of 10 million, as did travelling to government meetings in tuk tuks, a thwarted terrorist attack targeting the area I was staying in, many nights spent gorging on food-heaven road Jl. Sabang — and a few hundred hours sitting in traffic jams. 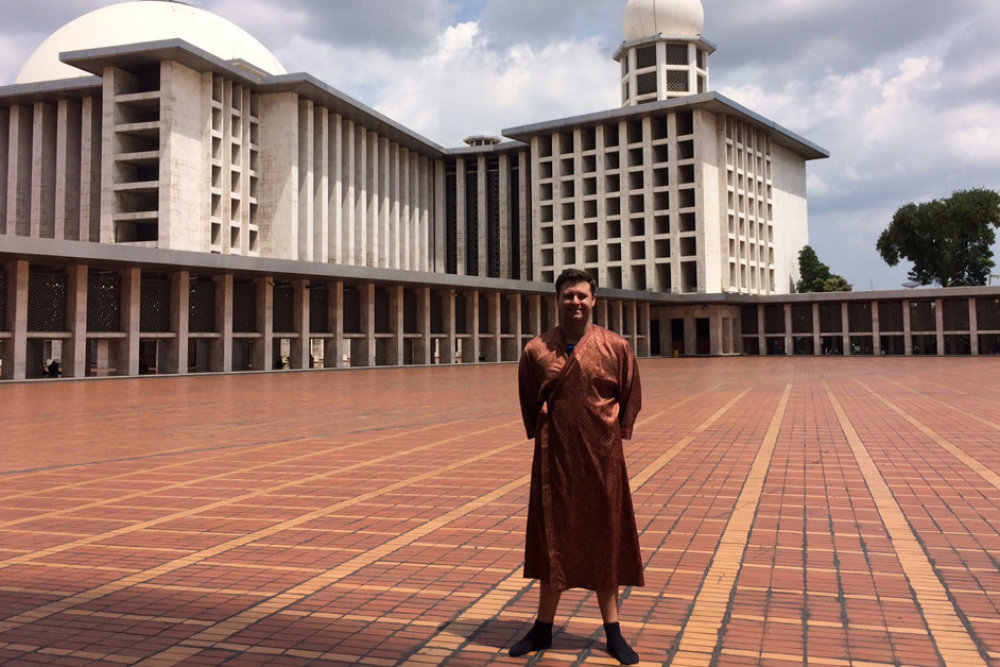 Will Seal at the Istiqlal Mosque, Jakarta. The largest mosque in Southeast Asia, with a capacity of 200,000

Traffic woes aside, as mentioned, for New Zealand Indonesia’s value as a partner is unquestionable — so too is ASEAN. This is evident in the numbers, with NZD$1.6b of NZ-Indonesia bilateral trade, and NZD$14.5b with Southeast Asia, and ever expanding diplomatic, travel, education and cultural links to both.