Published 22.01.2021
Almost three years on from his Asia New Zealand Foundation-sponsored arts residency in Varanasi, India, Elliot Collins looks back on the three months he spent living in the city on the banks of the Ganges and how the experience has impacted him as an artist and as a person. 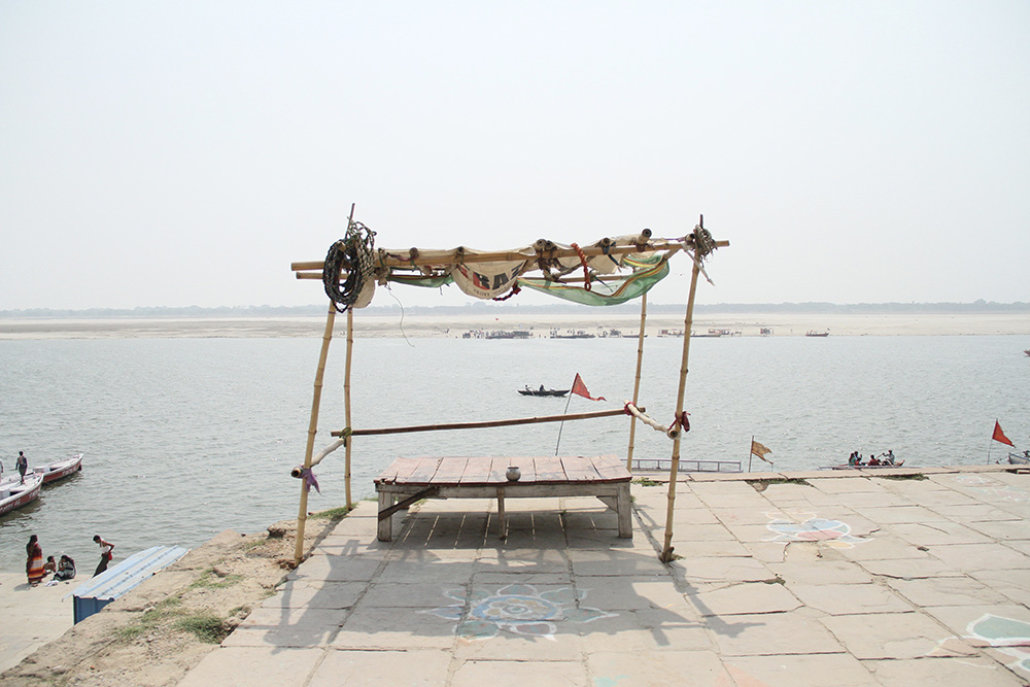 Elliot: "But residencies like this one removes the blinkers. It rids you of your ignorance; it humbles you; it opens your eyes; it makes you rethink everything, especially the way you want to make art."

What are your most enduring memories of being in Varanasi?

Mostly the colours and smells of the city. It’s a small/huge place. Spiritually, physically and emotionally.

My first few days were actually overwhelming and I would retreat to the safety of the compound and gardens. But once the regular chaos became routine, I loved spending days just wandering around the city or along the river.

The most enduring memory was getting so see large gatherings of women very early in the morning, just before sunrise meeting at temples during the Durga celebrations, the flurry of sari and flowers and lights and offerings all combining to create an otherworldly place, temporarily elevating the obvious struggles of so many and leaving a holy and sacred energy to everything and everyone around.

Was there anyone in particular you met during the residency who had a lasting impact on you?

Reiko Shimizu and Lisa Myeong-Joo were an incredible pair of artists and collaborators. Embodying what it really meant to collaborate and create. They were very intentional and debuted a powerful work called 2018: ‘SUN-SANGA’ at Kriti Gallery, Varanasi. Using turmeric paste to colour a sheet with a projection of a hand finding the sun in black and white. It was breath-taking and meditative all at once.

How did living in Varanasi for three months affect you?

It made me totally appreciate my privilege. Outside of New Zealand I’m not pākehā, I’m just an ordinary westerner. Being so obviously an outsider, I was affected by being such a minority; I stood out so obviously.

The heat was also intense, the smells I’ll never forget. It really changes your outlook on life.

India, as a gross generalisation, is not a contemporary art hub that Europe or America are, yet it offers up different ways to view contemporary art. Varanasi was a dirty, messy, confusing, beautiful place. There is constant traffic, sacred cows roam the streets unhindered by the surrounding chaos. Elliot: "Varanasi will always have a very special place in my heart and mind as it exists outside of time and space in all its crumbling, inspiring beauty."

There are Sufi mystics meditating along the river, smoking marijuana and American tourists attempting to find themselves. Maybe they did. At the river, where everything happens, there are bodies being burnt and children playing in the water.

People come from miles across the globe to visit this sacred place to heal and pray and wash and to die. So there is a constant spirit of death in the air, and the thin transition from life to death is ever-present. Meanwhile, water buffalo are herded across the vast floodplain, through the river and up steep temple steps.

Food and jewellery are being constantly sold to you, while the smell of always burning incense is masked by funeral pyres and the chiming of always ringing bells is often drowned out by Indian pop music and constantly beeping horns of the city just a few streets away.

India is a hard place for a sensitive westerner like me to exist in. I quickly became indifferent to the vast poverty and suffering that exists alongside excessive wealth. Varanasi will always have a very special place in my heart and mind as it exists outside of time and space in all its crumbling, inspiring beauty.

How did being in Varanasi impact your subsequent work?

It changed the colours used and attitude I used to make the work. It was hard work to work in that heat and along the river.

Every morning I would walk down to the river and begin filming. Each ghat has been documented in the video work, From Assi to Brahma, 2018.

Can you describe the works/exhibition you held on your return?

The show called A Memory of the River, consisted of a digital video work that was shot through an old ‘box brownie’ camera. As well as a large oil painting that took the duration of the residency to complete.

I also showed photographs from the trip with different objects like a bell, a lock and a small stool. In another room, I lined the walls with stripe watercolour painting made from the holy river water. Each set referenced different colours of the painted ghats or steps along the Ganges.

Watch a slideshow of images Elliot took during the residency

Why do you think overseas arts residencies are important?

They are important because you can go to art school and live and work in the art world that you know, that is safe and predictable. But residencies like this one removes the blinkers. It rids you of your ignorance; it humbles you; it opens your eyes; it makes you rethink everything, especially the way you want to make art.

What are you doing/working on at the moment?

At the moment I’m preparing Owhango Summer Sculpture show and a group show later this year year at Te Tuhi. Other than that, I continue to make and think and wander. I am working on more place-based video and poetry.

We spoke to artist Natalie Guy about her time as the 2017 Asia New Zealand Foundation artist in residence at Kriti Gallery in Varanasi, India. She describes living in Varanasi and the works she create

Artist Tristan Carter talks about how his 2013 Foundation arts residency in Bangalore, India, inspired his latest collaboration, Shades of Shakti, a group that fuses classical Indian music and Jazz.