Published 24.08.2021
We talk to director of Whirinaki art gallery Leanne Wickham about the animated and interactive work Flowers and People - Gold, by Japanese 'ultra-technologists' teamLab. The Upper Hutt gallery was supported to present the work through the Foundation's Arts Project Fund. 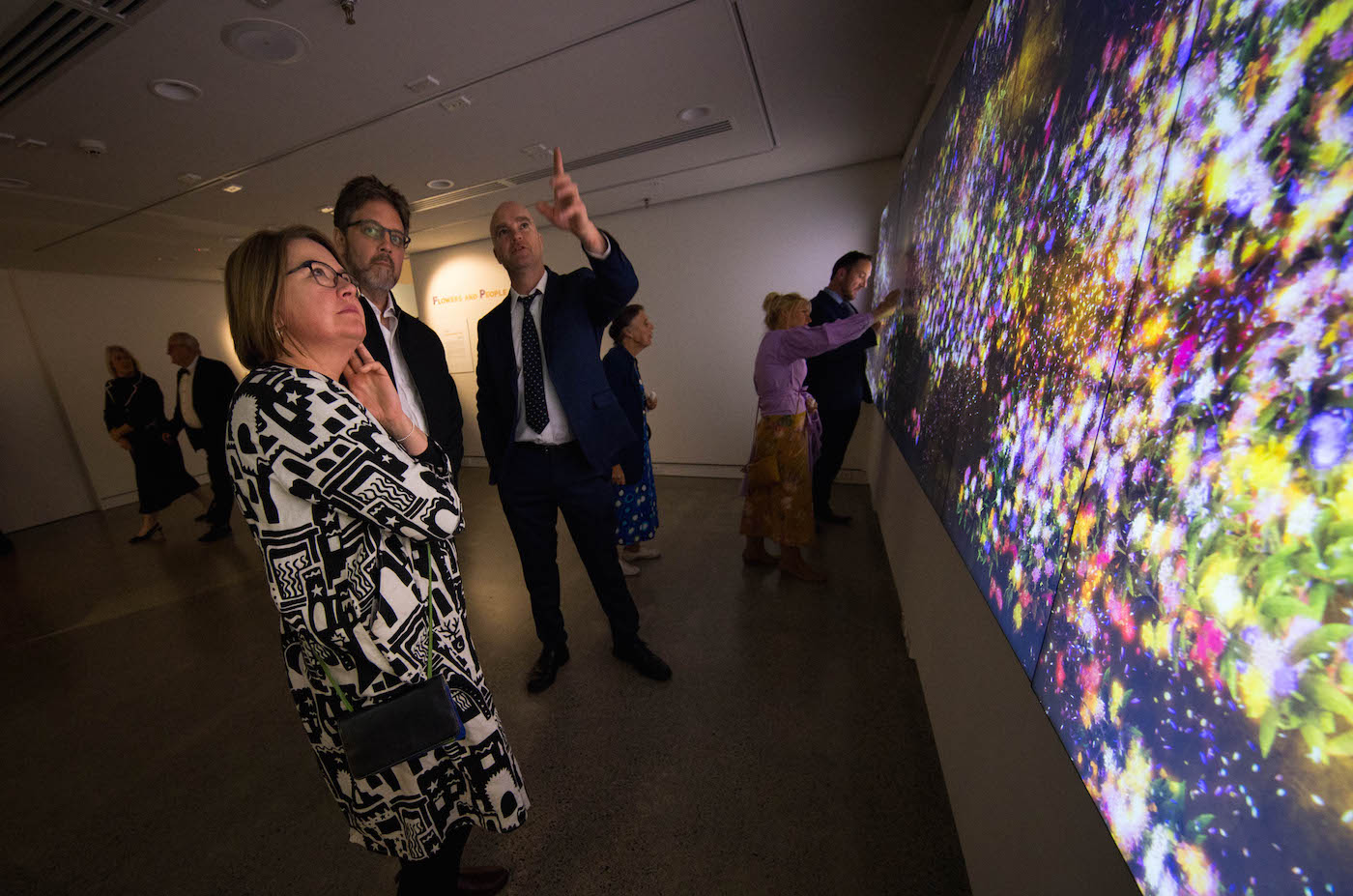 Can you describe Flowers and People - Gold? What is it about

Leanne: The work is based on the theme of the seasons, often reflected in Japanese art and important in Japanese culture and was inspired by a visit to Kunisaki Peninsula in the spring, a time when cherry blossoms were in abundance around the mountains.

It shows flowers that gradually bud, blossom, and grow, before their petals begin to wither and eventually fade away. Depending on the proximity of the viewer to the work, the flowers shed their petals all at once, or come to life and blossom once again.

Who are teamLab? They sound like an interesting group...

Leanne: teamLab (Tokyo) is a co-operative, interdisciplinary group of professionals, headed by Toshiyuki Inoko, who refer to themselves as ‘Ultra-technologists’.

The collective is made up of various specialists such as artists, programmers, engineers, CG animators, mathematicians and architects whose collaborative practice seeks to navigate the confluence of art, science, technology, and the natural world.

What makes teamLab different is that they explore the relationship between the self and the world and new perceptions through art.

Flowers and People - Gold was inspired by a visit to Kunisaki Peninsula in the spring, a time when cherry blossoms and rape blossoms were in abundance around the mountains. Seeing this scenery led to questions for the group about human intervention in the ecosystem; what do humans plant and what is propagated by nature?

Can you describe the audience experience?

Leanne: The animated installation work shows flowers that gradually bud, blossom, grow and appear from all areas of the screen. Once a viewer steps close, (and is detected by sensors) the flowers start to wither away and die. A cycle endlessly continues, revolving around the coming to life and then the gradual decay that eventually leads to death.

The interaction between the viewer and the installation fuels the work, continually changing the animated states that cannot be replicated. It is the viewer’s presence that prompts the cycle the flowers will take.

The elapsing of time that ‘Flowers and People – Gold’ conveys is one where the viewer as human body is implicated in the play of time. Through movement, they trigger the decay of the flowers that appear before them on the screen.

How have audiences responded to the work?

Why did you want to bring the work to New Zealand?

Leanne: We bought these works to New Zealand to celebrate its interactive nature.

The work Flowers and People – Gold is an interactive work that takes up the theme of the seasons, which is often reflected in Japanese art and important in Japanese culture.

teamLab in particular has a keen awareness of the importance of pre-modern Japanese art and culture and the importance of keeping it relevant in the contemporary world. The work is also reminiscent of traditional Japanese screens, such as the Gallery's 17th century Rinpa work 'Flowers of the four seasons'.

Not only is ‘Flowers and People’ presented on vertically hung digital screens but its complex animations, which are layered upon a gold background, is evocative of gold leaf backdrop on the painted screens. People in New Zealand have never seen anything like this before and we felt it important to showcase this new type of work, modern but inspired by an ancient culture.

You've told me Expressions has a commitment to showing interactive work from Asia; so, do you have the next exhibition from Asia already in mind?

Leanne: We are working on this one…watch this space!

*Due to the current Covid-19 alert level, Whirinaki art gallery will remain closed until further notice

Find out about the exhibition

We talk to Expressions Whirinaki Gallery curator Leanne Wickham about an interactive art installation from South Korea that gave gallery goers the sensation of touching clouds.