Published 13.08.2019
Auckland Live digital curator Nolwenn Lacire travelled to South Korea in June to learn about the country’s digital art scene and attend the International Symposium of Electronic Art in Gwangju. She was assisted by a Foundation Arts Practitioners Grant.

I arrived in Seoul, South Korea, mid-afternoon and made my way to my guesthouse in Hongdae, a busy, youthful area of the city. I managed to find some Japanese food and thought about the tense connection between these two cultures due to Japan’s former occupation of the Korean Peninsular.

The curators I met in Seoul from the National Museum of Modern and Contemporary Art and from the Bucheon Art Bunker B39 were young and brilliant. Despite some language difficulties, we managed to talk about their practices and about the digital art scene growing in South Korea, where IT is one of the biggest industries and easy access to technology has seen artists embrace the art form.

Before diving further into the local digital art ecosystem, I took time to explore the city. Metro stations are written in Korean and English and TV screens in each carriage inform you where you are and give you great cooking tips for a healthy diet.

Temples and palaces in the city are visited by tourists and also young Koreans in traditional attire called “hanbok”. In just a few metres, you can see eccentric architecture such as the Dongdaemun Design Plaza by architect Zaha Hadid, super high-rise buildings, street-food markets and a newly restored stream running through downtown. It seems that Koreans have no fear to think and go big while honouring their traditions. 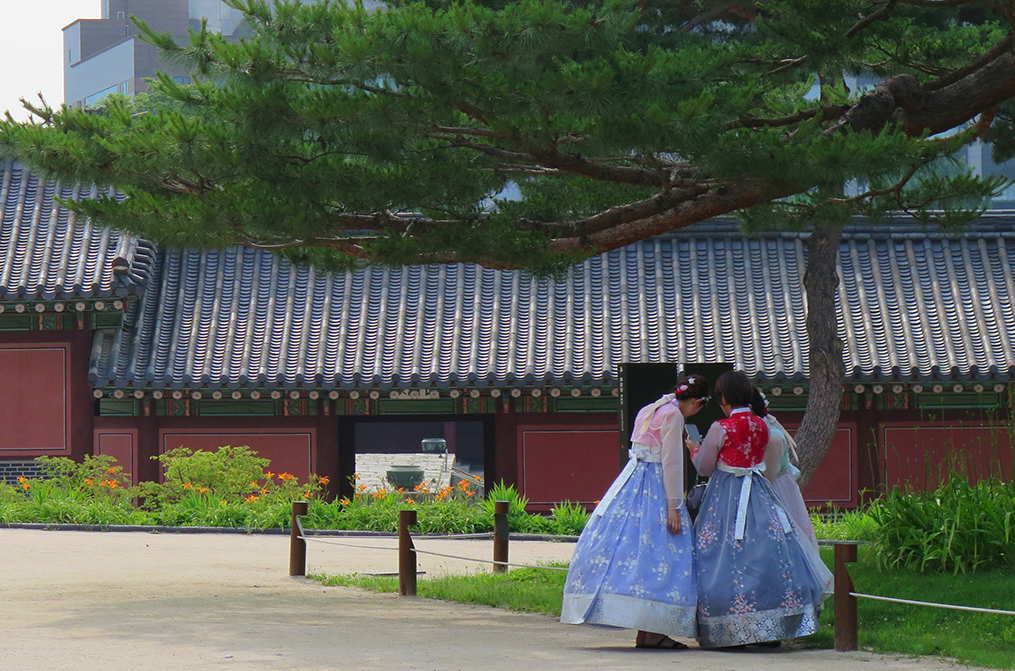 Nolwenn: "It seems that Koreans have no fear to think and go big while honouring their traditions."

Time for me to take the express train to Gwangju, one of South Korea largest cities with as many inhabitants as in Auckland.

This city has a unique historical background as it became a symbol of democracy with the May 18 Democratic Uprising in 1980. Gwangju citizens took up arms to demonstrate against the government and martial law. The traumatic event that took the lives of hundreds of citizens is a strong symbol of this city and its unique take on culture and politics.

Another feature of Gwangju is the Asia Culture Centre (ACC) opened in November 2015 with the aim of presenting Asian cultures, with a strong emphasis on Korean culture. This over-sized bunker includes a museum for children, theatres, an outdoor plaza and a 76-meter-long media wall. It was the venue where the International Symposium for Electronic Art (ISEA) was held.

At ISEA many academics and curators focused on the famous video artist Nam June Paik, who was born in Korea but travelled and practiced all around the world; however, there were other interesting exhibits.

Art Centre Nabi and the Creative Technology team of ACC put together exhibitions and performances using digital tools to comment on the contemporary world. For example, the exhibition FoodHack creatively fused technology and art, including a workshop for young audiences where food was available for them to create hybrids with electronic components.

One of the keynote speakers at the conference Kwangyun Wohn, chair of the National Council of Science & Technology, presented his theory that the next industrial revolution will be hybridisation of humans with technologies. Korean artists and curators seem to have no limitations to experiment, so they are surely ready for this revolution.

Performances to open and close the conference incorporated a beautiful mix of traditional elements like costumes and instruments with modern technologies such as drones.

It was time to leave and so I went to the airport. There I met a robot that politely followed me, asking repeatedly if I needed some help.

Nolwenn developed Auckland Live’s interactive art programme and curates a large digital screen in Aotea Square, Auckland. Following her visit, she is looking to develop projects with arts organisations she connected with in South Korea.