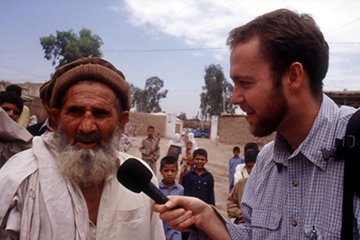 It’s a career path most New Zealand journalists could only dream of. Massey journalism graduate Tarek Bazley set out on that path in 2000, when he applied for the Foundation’s inaugural internship at the Phnom Penh Post in Cambodia.

“It was like the wild west at the Post. You had a lot of freedom to travel and pretty much do what you wanted,” Tarek recalls. “I did interviews for a Radio New Zealand documentary on the trial of the Khmer Rouge, and a programme on the films of Cambodia’s former King Sihanouk. The BBC World Service ran that and selected it as 'Pick of the Month'. So that was neat.”

Radio New Zealand thought so, too. Tarek worked for them as a reporter/producer for the next three years, during which time he received two more Foundation grants: one to help him travel to Pakistan to cover the aftermath of the US-Afghan conflict and the other to visit war-torn Sri Lanka in 2003 to look at longterm prospects for peace.

“It was almost poetic that the two key people I interviewed in Sri Lanka were S.P Tamilchelvan, leader of the rebel Tamil Tigers’ political wing, and Prime Minister Mahindra Rajapaksa. In 2007 Rajapaksa blitzed the Tamils and Tamilchelvan was one of the first to die,” Tarek says.

Itchy feet took Tarek to London in 2004 and a new career with the BBC World Service and BBC4, including work on Hardtalk. In 2006 he joined Al Jazeera’s London office and in 2009 moved to Doha, eventually becoming Al Jazeera’s science and technology editor.

“The Asia New Zealand Foundation grants kickstarted my career,” Tarek says. “But the Media programme is not just about giving journalists skills to work internationally. It’s also the knowledge to be more insightful when dealing with local communities.”