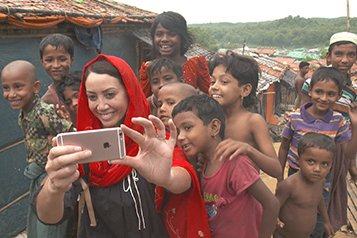 Securing the funding to make a feature is just the starting point for TVNZ’s Sunday programme. It’s then that the hard work begins.

Since 2012 the Foundation has supported Sunday film crews to make five reporting trips to Asia, taking in Japan, South Korea, Sri Lanka, Bangladesh and North Korea. They covered everything from the plight of Rohingya refugees in Bangladesh camps to New Zealand birders documenting migratory shore birds in North Korea.

“It took us months and months to get visas into North Korea,” says executive producer Jane Skinner.

“It was the year after the Otto Warmbier case. In order to travel safely and with the right endorsements we were dealing with MFAT, the NZ embassy in Beijing, TVNZ’s executive all the way up to the Board on health and safety, and international insurers."

Once in North Korea, the sense of isolation was intense, reporter Mark Crysell says. “You can’t communicate easily, there’s no internet and you’re followed and watched everywhere.”

But despite that, the crew and the Miranda birders group were successful in their mission to visit remote Sindo island, strategically located between China and North Korea. They were the first foreigners to do so.

Visas were also a problem for Bangladesh. The crew’s visit needed to coincide with the placement of two NZ Red Cross medical staff at the field hospital near the sprawling refugee camp. In the end, they had only four days on the ground together, two of which were lost to illness.

The crew battled brutal heat and humidity, poor roads and harrowing conditions within the world’s largest refugee camp. The result was worth it.

“Individual stories – verbalised so powerfully and courageously – put this huge and overwhelming crisis into a human scale,” producer Paul Deady says, describing the result as “both moving and confronting”.