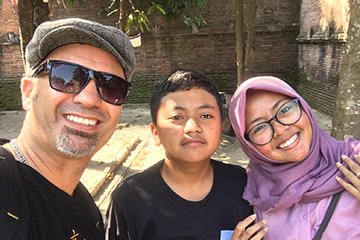 Music teacher Brent Strathdee-Pehi already had an interest in Asia when he was picked to take part in the Foundation’s Indonesia Cultural Connections trip in 2017, but he was still unprepared for what he found.

“Our cultures and even languages have similarities, such as high emphasis on respect for elders, extended family, music and dance, culture and heritage, humour and - of course - the importance of food.”

It was the start of a love affair with Indonesia that was to change Brent’s life. Following the visit, he began learning Bahasa Indonesia and developing friendships with Indonesian people, schools and organisations. His new Asia Culture Club at Okaihau College drew students keen on exploring Asian cultures – everything from anime and martial arts to K-Pop.

Brent and a fellow teacher in Yogyakarta also set up a Google Hangout for students to communicate and learn about each other.

Late in 2018, Brent went back to Indonesia for two months to immerse himself in the language and culture, returning in 2019 to Central and East Java. He has started an extra-curricular weekly Indonesian class at Northland College and hopes to take a small student group to Indonesia in 2020. He’s keen to work with Māori and Indonesian students from less privileged backgrounds.

“I truly believe that creating opportunities for New Zealand and Indonesian students to meaningfully interact will result in increased understanding, respect and tolerance,” he said.

In December 2018 Brent announced his decision to become a Muslim.

“I fell in love with the culture and the people (in Indonesia),” he explained. ”Islam really reached to me while I was there.”