Published 17.01.2020
Playing rugby in Japan during last year's Rugby World Cup was an eye-opening experience for Wainuiomata High School's First XV, but it was experiencing the culture and generosity of the locals that really impressed the players, writes deputy principal Philip Kauika.

We had a fantastic trip - a trip of a lifetime. The cultural exchanges were everything we could have hoped for and more.

Watch a slideshow of photos from the trip

Our first destination was Hachinohe, a city of quarter of a million people in the far north of Japan’s largest island, Honshu.

In Hachinohe, we were welcomed by the entire school and we responded with our school’s haka. This was overwhelming as we did not except such a magnificent reception.

The school treated us with awesome hospitality and to spend time with some families in the north of Japan was a privilege and exciting for all our touring group.

Due to the fantastic hospitality, the rugby match between the two schools became much more of a background component as the locals treated us so very well, something that we encountered throughout our time in Japan.

From Hachinohe, we travelled almost the length of Honshu to Fukuoka on Kyushu island, where we were hosted outstandingly well by Izuka High School, which is Wainuiomata High School's sister school.

Our boys stayed with local families, an experience they enjoyed so much there were many tears on our departure.

The ability to share a classroom and be taught Japanese calligraphy is something they will always remember. However, the highlight of this part of the trip, like it was everywhere we stayed, was sharing our rugby skills through workshops with local students. While language was a barrier, our boys had picked up some words and phrases. In Beppu, we were able to play more rugby and visited an international university. This was another awesome experience for our boys as they were able to see how a university functions but also play some rugby on the university grounds.

In Beppu we also got to attend the All Blacks World Cup game against Canada, which was a real highlight. At the game, we achieved a degree of fame thanks to sharing our school haka, which was captured by the media and viewed by over 500,000 people worldwide.

Our boys’ heads grew massively, but the pride they have for their own community back here in New Zealand also grew.

After the match, we took many photos with locals and the boys were only too happy to share our waiata with the crowd as we walked back to the bus from the stadium.

Our tour of Saiki city and homestaying with local farmers was a true privileged for us.

The food was outstanding and hospitality again was top notch. We took a tour of Saiki and were awed at the history that surrounded us by way of the architecture and culture.

Our boys were able to learn about green tea ceremonies and the tikanga involved. As many of the team are Māori or Pasifika, they were able to relate to the reasons things were done in a particular way. 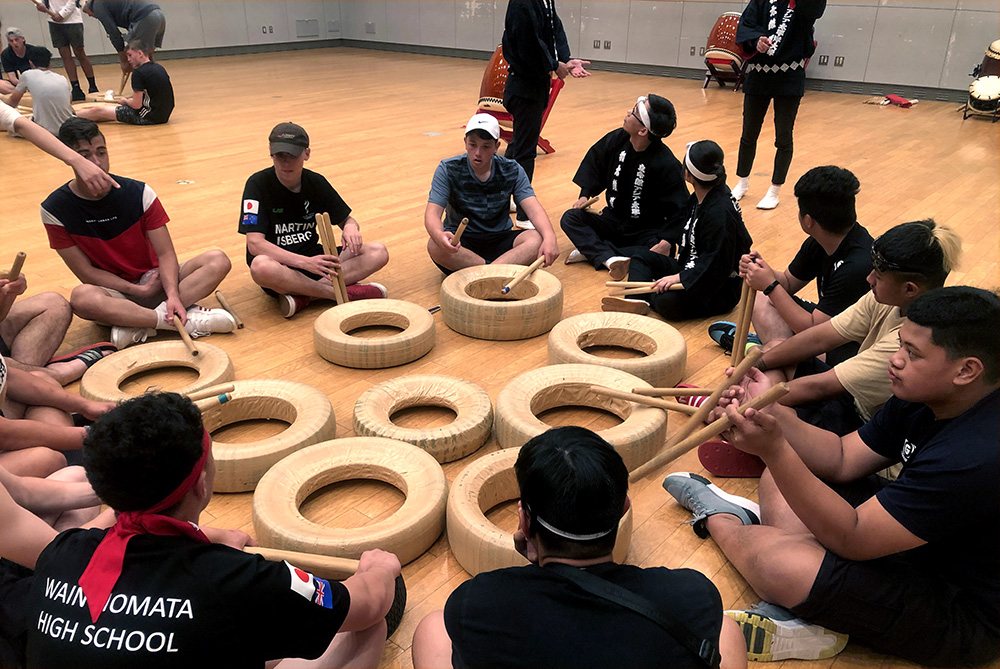 Finally, in Tokyo we got to see sumo in action with a visit to a sumo-beya (sumo stable) where we got to meet with young sumo, watch them train and share a meal.

The humble way athletes trained and observed the protocols associated with the sport prior to a bout was something I thought would be a challenge for our boys. However, they stepped up to the challenge and watched attentively.

At the end of our visit, we were asked if we would like to step into the ring, a once in a lifetime opportunity. We all absolutely loved seeing sumo in real life and were thankful for the local company who were able to show us some of the sights and attractions in Tokyo.

This experience is something that has truly opened the students’ eyes beyond their own backyard to the wider world around them.

We took this tour as a rugby tour but quickly found out that rugby would play second fiddle as we immersed ourselves in local culture and shared New Zealand and Māori culture in return.

With only one person out of a group of 32 having travelled there before before, Saint Peter's College First XV's trip to Japan was always going to be an incredible learning experience.

Hamilton Boys' High School First 15 coach Logan Asplin writes about taking the team to Japan to in April where they played local teams and billeted with Japanese families.